Home » Knowledge Base Updates » The Chuditch or Western Quoll

The Chuditch or Western Quoll

The western quoll (Dasyurus geoffroii) is also known as the chuditch (especially Western Australia, from Noongar djooditj[3]), atyelpe or chilpa (from Arrernte[4]), kuninka (from Western Desert language[5]) and western native cat. It is a medium-sized predator and has a white-spotted brown coat and a long tail like its eastern and northern relatives. It differs from the closely related eastern quoll in possessing a first toe on the hind foot and a darker tail. It is classed as a near-threatened Australian dasyuromorph, whose distribution is now confined to south-western Western Australia.

The Western Quoll used to be found over approximately 70% of mainland Australia, occurring in every State and Territory of the mainland. It is now only present in south-western Western Australia (WA).

The Western Quoll, roughly the size of a small domestic cat, is WA’s largest native carnivore. As a predator at the top of the food chain, the Western Quoll is dependant on, and a good indicator of, the abundance of its prey and the health of the ecosystem. This is affected by many factors including habitat alteration, bushfires, and disease. For instance, clearing of land or removal of suitable den logs can reduce the area that is suitable for Western Quolls to live in.

Other factors contributing to the decline of the Western Quoll are: predation by, and competition for food with, foxes, feral cats and raptors; being hit by motor vehicles; illegal shooting, poisoning and trapping; accidental drowning in water tanks; and entanglement in barbed wire fencing.

To ensure the future survival of this species, there are plans to establish a breeding program to increase numbers of Western Quolls, and to re-introduce the Western Quoll to areas where they once occurred. 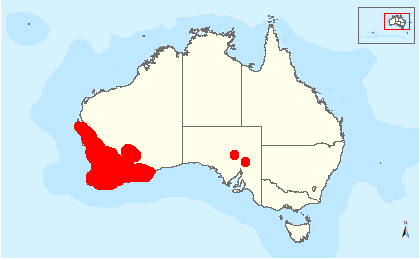