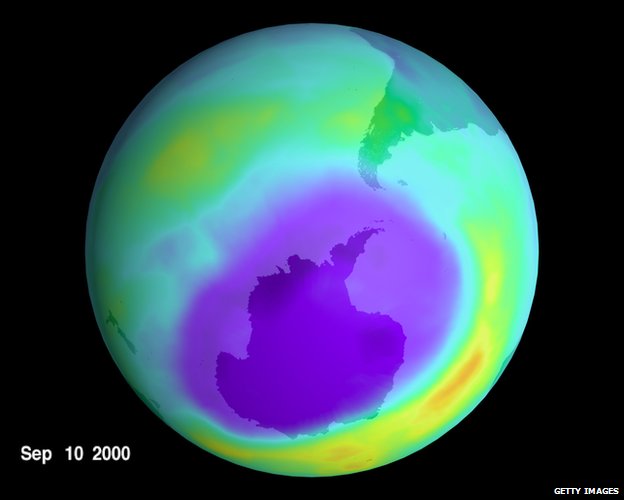 Scientists have identified four new man-made gases that are contributing to the depletion of the ozone layer.

Two of the gases are accumulating at a rate that is causing concern among researchers.

Worries over the growing ozone hole have seen the production of chlorofluorocarbon (CFC) gases restricted since the mid 1980s.

But the precise origin of these new, similar substances remains a mystery, say scientists.

Lying in the atmosphere, between 15 and 30km above the surface of the Earth, the ozone layer plays a critical role in blocking harmful UV rays, which cause cancers in humans and reproductive problems in animals

Scientists from the British Antarctic Survey were the first to discover a huge “hole” in the ozone over Antarctica in 1985.

The evidence quickly pointed to CFC gases, which were invented in the 1920s, and were widely used in refrigeration and as aerosol propellants in products like hairsprays and deodorants.

Remarkably, global action was rapidly agreed to tackle CFCs and the Montreal Protocol to limit these substances came into being in 1987.

A total global ban on production came into force in 2010.

Now, researchers from the University of East Anglia have discovered evidence of four new gases that can destroy ozone and are getting into the atmosphere from as yet unidentified sources. 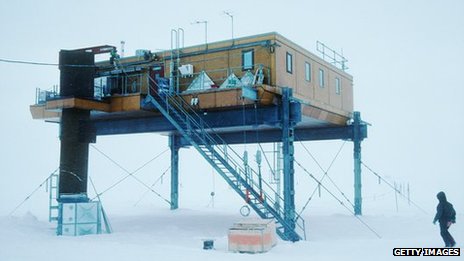 The Halley Research Station in Antarctica, where the hole in the ozone layer was first discovered

Three of the gases are CFCs and one is a hydrochlorofluorocarbon (HCFC), which can also damage ozone.

“Our research has shown four gases that were not around in the atmosphere at all until the 1960s which suggests they are man-made,” said lead researcher Dr Johannes Laube.

The scientists discovered the gases by analysing polar firm, perennial snow pack. Air extracted from this snow is a natural archive of what was in the atmosphere up to 100 years ago.

They estimate that about 74,000 tonnes of these gases have been released into the atmosphere. Two of the gases are accumulating at significant rates.

“The identification of these four new gases is very worrying as they will contribute to the destruction of the ozone layer,” said Dr Laube.

“We don’t know where the new gases are being emitted from and this should be investigated. Possible sources include feedstock chemicals for insecticide production and solvents for cleaning electronic components.”

“What’s more, the three CFCs are being destroyed very slowly in the atmosphere – so even if emissions were to stop immediately, they will still be around for many decades to come,” he added.

Other scientists acknowledged that while the current concentrations of these gases are small and they don’t present an immediate concern, work would have to be done to identify their origin.

“This paper highlights that ozone depletion is not yet yesterday’s story,” said Prof Piers Forster, from the University of Leeds.

“The concentrations found in this study are tiny. Nevertheless, this paper reminds us we need to be vigilant and continually monitor the atmosphere for even small amounts of these gases creeping up, either through accidental or unplanned emissions.

“Of the four species identified, CFC-113a seems the most worrying as there is a very small but growing emission source somewhere, maybe from agricultural insecticides. We should find it and take it out of production.

The four new gases have been identified as CFC-112, CFC112a, CFC-113a, HCFC-133a
CFC-113a has been listed as an “agrochemical intermediate for the manufacture of pyrethroids”, a type of insecticide once widely used in agriculture
CFC-113a and HCFC-133a are intermediaries in the production of widely used refrigerants
CFC-112 and 112a may have been used in the production of solvents used to clean electrical components

The research has been published in the journal, Nature Geoscience.