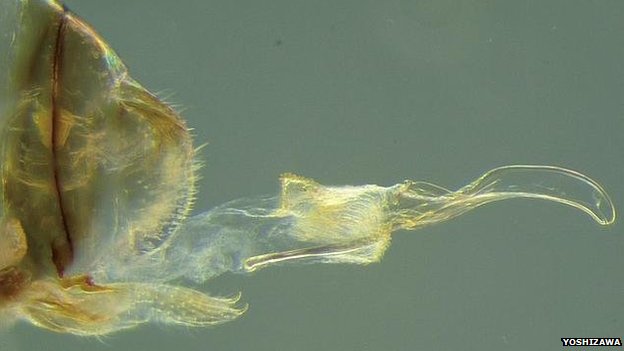 the female penis of N. aurora
The erectile organ is inserted into males to suck out sperm and food

Female insects with “penises” have been discovered in Brazil – the first example of an animal with sex-reversed genitalia, scientists say.

The elaborate structure, dubbed a “gynosome”, is used to suck out sperm and nutritious seminal fluids.

“Although sex-role reversal has been identified in several different animals, Neotrogla is the only example in which the intromittent organ is also reversed,” said lead author Kazunori Yoshizawa from Hokkaido University in Japan.

The gender-bending insects were found in a cave in eastern Brazil and represent four distinct species in the Neotrogla genus.

Once inside a male, the membranous part of the female gynosome inflates. It has numerous spines which anchor the two insects together.

When the researchers attempted to pull a male and female apart, the male’s abdomen was ripped from the thorax without breaking the genital coupling.

The unusual role reversal may have been driven by the resource-poor cave environment in which the bugs live, the researchers speculate.

Copulation provides a female with food as well as sperm – so it is advantageous for her to mate at a higher rate, they note.

The curious insects offer new opportunities to test ideas about sexual selection, conflict between the sexes, and the evolution of novelty.

“It will be important to unveil why, among many sex-role-reversed animals, only Neotrogla evolved the elaborated female penis,” said Yoshitaka Kamimura from Keio University in Japan.

Their first task, they say, is to establish a healthy population of the insects in the lab. 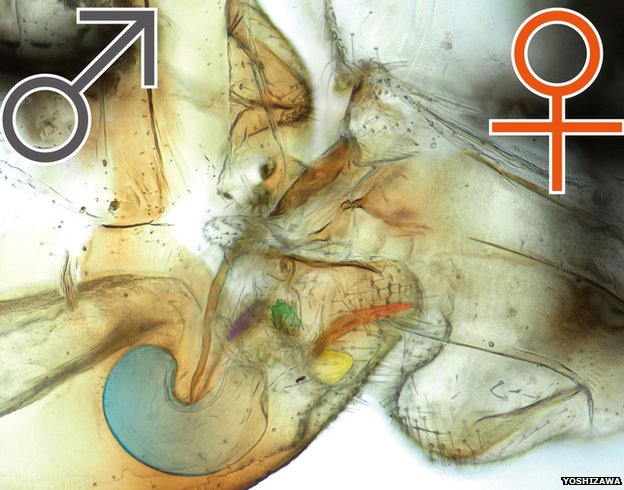 A close-up of the insects in copulation