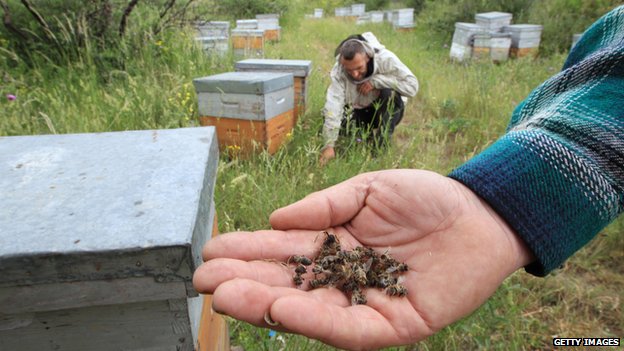 Neonicotinoid pesticides are causing significant damage to a wide range of beneficial species and are a key factor in the decline of bees, say scientists.

Researchers, who have carried out a four-year review of the literature, say the evidence of damage is now “conclusive”. The scientists say the threat to nature is the same as that once posed by the notorious chemical DDT.

Manufacturers say the pesticides are not harming bees or other species.

Neonicotinoids were introduced in the early 1990s as a replacement for older, more damaging chemicals. They are a systemic insecticide, meaning that they are absorbed into every cell in a plant, making all parts poisonous to pests.

But some scientists have been concerned about their impact, almost since the moment they were introduced. Much of the worry has surrounded their effects on bees. There’s been a well documented, global decline in these critical pollinators.

Many researchers believe that exposure to neonicotinoids has been an important destabilising factor for the species.

‘Worldwide impacts’
In 2011, environmental campaigners, the IUCN, established an international scientific taskforce on systemic pesticides to look into the impacts of these chemicals. The members have reviewed over 800 peer reviewed papers that have been published in the past 20 years.

Their assessment of the global impact says the threat posed goes far beyond bees.

In their report, to be published next month, they argue that neonicotinoids and another chemical called fipronil are poisoning the earth, the air and the water. The pesticides accumulate in the soil and leach into water, and pose a significant problem for earthworms, freshwater snails, butterflies and birds.

The researchers say that the classic measurements used to assess the toxicity of a pesticide are not effective for these systemic varieties and conceal their true impact.

They point to one of the studies in the review carried out in the Netherlands. It found that higher levels of neonicotinoids in water reduced the levels of aquatic invertebrates, which are the main prey for a whole range of species including wading birds, trout and salmon.

“There is so much evidence, going far beyond bees,” Prof Dave Goulson from the University of Sussex told BBC News.

“They accumulate in soils, they are commonly turning up in waterways at levels that exceed the lethal dose for things that live in streams. It is impossible to deny that these things are having major environmental impacts.”

DDT comparison
The scientists are very worried about the prophylactic use of neonicotinoids, where seeds are coated in the chemicals and the plant grows up with the ability to destroy pests already built in.

“It is a bit like taking antibiotics to avoid getting ill,” said Prof Goulson, one of a team of 29 scientists involved in the research.

“The more they are used, the stronger the selective pressure you place on pest insects to become resistant to them. Using them as prophylactics is absolute madness in that sense.” 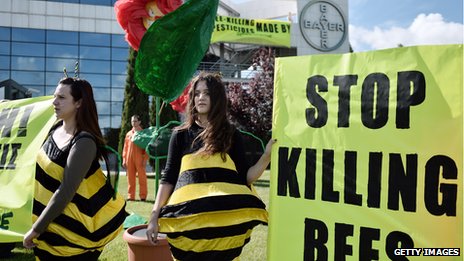 Campaigners have protested against the continued use of neonicotinoid chemicals

The task force argues that with neonicotinoids and fipronil making up around a third of the world market in insecticides, farmers are over-relying on them in the same way as they once became over reliant on chemicals like DDT.

“We have forgotten those lessons and we’re back to where we were in the 1960s,” said Prof Goulson.

“We are relying almost exclusively on these insecticides, calendar spraying 20 times or more onto a single field, it’s a completely bonkers way.”

While neonicotinoids don’t accumulate in human or animal tissue in the way that DDT once did, the modern pesticides are more lethal, about 6,000 times as toxic compared to the older spray.

Representatives of manufacturers say that there is nothing new in the task force study.

“There is very little credible evidence that these things are causing untoward damage because we would have seen them over 20 years of use,” said Dr Julian Little from Bayer, one of the manufacturers of neonicotinoids.

“If you look at the tree bumblebee, it is eating the same food as the other bees, and is being exposed to the same pesticide load and weather conditions and yet it is flourishing, whereas some other bees are not.

“If it were pesticides causing the mass destruction of our fauna, surely you would see effects on all bees?”

The European Crop Protection Association said the task force was being selective in their evidence, pointing to recent studies carried out by industry showing that the declines in bee populations have been overstated.

“We respect the scientists who have produced this research, but it appears that they are part of a movement that brings together some academics and NGOs whose only objective is to restrict or ban the use of neonicotinoid technology regardless of what the evidence may show,” a spokesperson said.

Europe already has a two-year moratorium in place meaning that neonicotinoids can’t be used on flowering crops such as oilseed rape.

Last week, President Obama announced the creation of a pollinator health task force to look at the impact of pesticide exposure on bees and other insects.

Prof Goulson says that he isn’t in favour of a ban.

“We have been using these things for 20 years and there’s not a single study that shows they increase yield,” he said.

“I’m not personally in favour of an outright ban but I think we should use them much more judiciously – if they don’t benefit yield we should stop using them.”