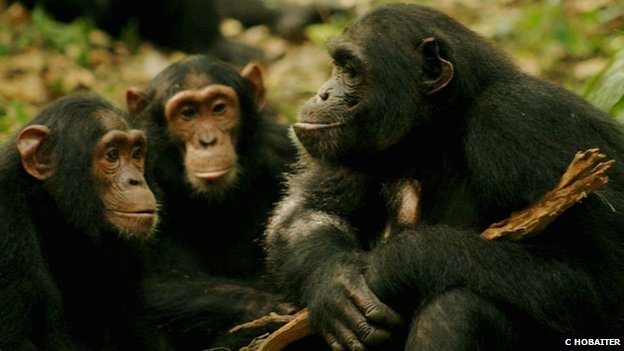 Researchers say they have translated the meaning of gestures that wild chimpanzees use to communicate.

They say wild chimps communicate 19 specific messages to one another with a “lexicon” of 66 gestures.

The scientists discovered this by following and filming communities of chimps in Uganda, and examining more than 5,000 incidents of these meaningful exchanges.

The research is published in the journal Current Biology.

Dr Catherine Hobaiter, who led the research, said that this was the only form of intentional communication to be recorded in the animal kingdom.

Only humans and chimps, she said, had a system of communication where they deliberately sent a message to another individual.

“They’re the only thing that looks like human language in that respect.” 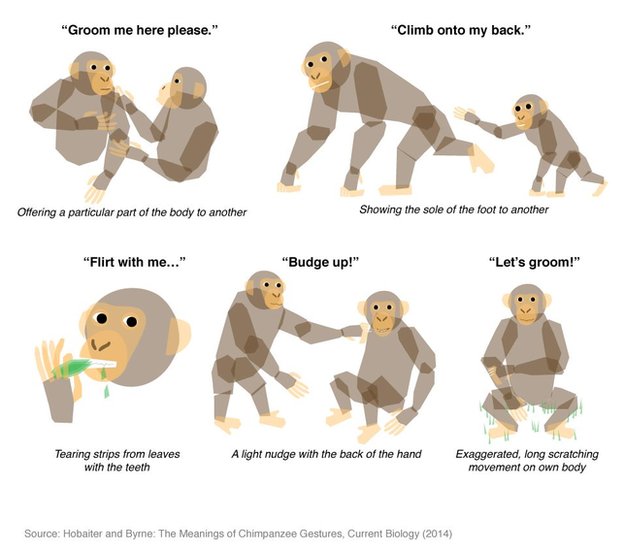 Although previous research has revealed that apes and monkeys can understand complex information from another animal’s call, the animals do not appear to use their voices intentionally to communicate messages.

This was a crucial difference between calls and gestures, Dr Hobaiter said.

“It’s a bit like if you pick up a hot cup of coffee and you scream and blow on your fingers,” she said.

“I can understand from that that the coffee was hot, but you didn’t necessarily intend to communicate that to me.”

Subtle signals
Some of the chimps’ gestures, the researchers say, are unambiguous – used consistently to convey one meaning.

Leaf clipping, for example, where a chimp very obviously takes small bites from leaves is used only to elicit sexual attention.

Many others, though, appear to be ambiguous. A grab, for example, is used for: “Stop that,” “Climb on me,” and “Move away.”

Although many are very subtle, some of the footage captured by the researchers shows very clearly what the chimps mean to convey.

In one clip, a mother presents her foot to her whimpering offspring, signalling: “Climb on me.” The youngster immediately jumps on to its mother’s back and they travel off together.

“The big message [from this study] is that there is another species out there that is meaningful in its communication, so that’s not unique to humans,” said Dr Hobaiter.

“I don’t think we’re quite as set apart as we would perhaps like to think we are.

“But then chimps are more closely related to us than they are to the rest of the great apes, so it makes sense that we are incredibly similar to them in many ways.”

Dr Susanne Shultz, an evolutionary biologist from the University of Manchester, said the study was commendable in seeking to fill the gaps in our knowledge of the evolution of human language. But, she added, the results were “a little disappointing”.

“The vagueness of the gesture meanings suggest either that the chimps have little to communicate, or we are still missing a lot of the information contained in their gestures and actions,” she said.

“Moreover, the meanings seem to not go beyond what other less sophisticated animals convey with non-verbal communication.

“So, it seems the gulf remains.”