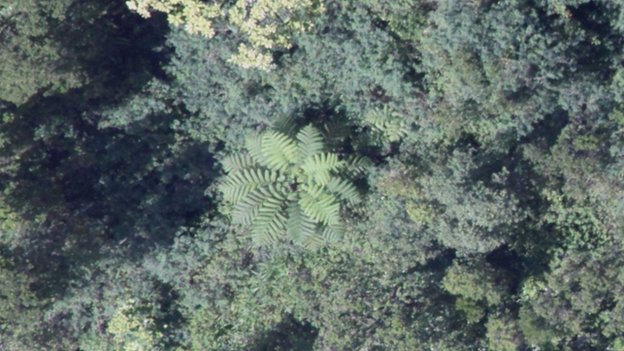 US conservationists and a satellite imagery company have teamed up to use the power of crowdsourcing to halt the spread of destructive invasive plants.

Species such as the Australian tree fern are using up vital water supplies within native forests on Hawaii, home to unique species found nowhere else.

So far, more than 5,000 people have visited the website.

To date, each pixel of the images of the forest has been scrutinised by web users at least 50 times.

“From a biodiversity viewpoint, it is very important that we protect forest resources,” explained Trea Menard, director of forest conservation for the US-based The Nature Conservancy (TNC).

“Unfortunately, we have lost a lot of our forests,” he told BBC News.

“For example, only about 27% of the forest remains on Kauai and that is an important forest because it is the biodiversity cradle for Hawaii as it is the oldest island.

Threatened habitat
“The native forest is extremely unique. About 90% of the plants and animals that evolved here do not occur anywhere else in the world, which means they are endemic to Hawaii.

“If they are lost from Hawaii, they are pretty much lost to the planet.”

The invasive plants are dramatically reducing the volume of fresh water available for native species.

The Australian tree fern is able to penetrate remote areas of the native forest because it is dispersed via spores carried by the wind, making it difficult to be tracked and located on the ground.

In order to overcome this obstacle, TNC has teamed up with satellite imaging firm DigitalGlobe to call on web users to scan and spot the invasive species in images posted on the web.

The images, provided by Resources Mapping, are aerial photos providing 1cm per pixel.

The campaign has been running since June and each pixel of the images available has been accessed by at least 50 users, providing a built-in level of quality control.

Here’s a 9 minute clip from our documentary Hawaii – Isles of Extinction. This clip looks at the impact of introduced plant species.

Here’s the full 50 minute documentary Hawaii – Isles of Extinction which looks at the much wider issue of Hawaii’s dwindling endemic flora and fauna.