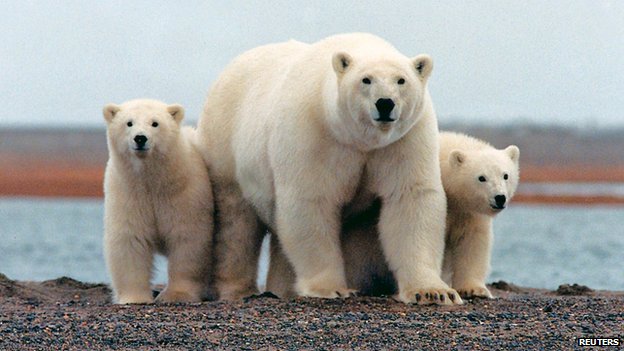 About 2.8m hectares are currently managed as wilderness in the national wildlife refuge

US President Barack Obama is to propose setting aside the majority of Alaska’s national wildlife refuge as a wilderness area.

This would halt the possibility of fossil fuel exploration in the refuge’s potentially oil-rich coastal plain.

The proposal drew an angry response from top state-elected officials.

Some 2.8 million hectares (7 million acres) of the refuge are managed as wilderness.

The Arctic National Wildlife Refuge’s coastal plain has long been at the centre of a struggle between conservationists and advocates of greater energy exploration.

In a White House video, President Obama said he was seeking the designation “so that we can make sure that this amazing wonder is preserved for future generations”.

The US Department of the Interior has also issued a plan that for the first time recommends the additional protections.

If Congress agrees, it would be the largest area set aside under the designation since the passage of the Wilderness Act in the 1960s, the agency said.

However, the proposal is likely to face stiff resistance in the Republican-controlled Congress.

“They’ve decided that today was the day that they were going to declare war on Alaska. Well, we are ready to engage,” said Republican Senator Lisa Murkowski, who chairs the Senate energy committee.

Political leaders in Alaska have supported exploration and production within the coastal plain and have opposed attempts to further restrict development on federal lands, which comprise about two-thirds of the state.

The Republican congressional delegation, along with Alaska’s new governor, Bill Walker, has sent out a joint statement branding the action “an unprecedented assault on Alaska”.

Mr Walker told reporters in Anchorage that while he did not currently favour litigation, the state is reviewing its options.

He said the federal government was taking Alaska’s economy away from it piece by piece.