Arachnids are a class (Arachnida) of joint-legged invertebrate animals in the subphylum Chelicerata. All arachnids have eight legs, although in some species the front pair may convert to a sensory function. The term arachnid is from the Greek word άράχνη or arachne, meaning spider and also referring to the mythological figure Arachne. 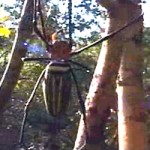 Most arachnids are terrestrial. However, some inhabit freshwater environments and, with the exception of the pelagic zone, marine environments as well. They comprise over 100,000 named species, including spiders, scorpions, harvestmen, ticks, and mites.

Almost all adult arachnids have four pairs of legs, and arachnids may be easily distinguished from insects by this fact, since insects have only six legs. However, arachnids also have two further pairs of appendages that have become adapted for feeding, defense, and sensory perception. The first pair, the chelicerae, serve in feeding and defense. The next pair of appendages, the pedipalps have been adapted for feeding, locomotion, and/or reproductive functions. In Solifugae, the palps are quite leg-like, so that these animals appear to have ten legs. The larvae of mites and Ricinulei have only six legs; the fourth pair appears when they moult into nymphs. However, there are also adult mites with six, or even four legs.

Arachnids are further distinguished from insects by the fact they have no antennae or wings. Their body is organized into two tagma called the prosoma, or cephalothorax, and the opisthosoma, or abdomen. The cephalothorax is derived from the fusion of the cephalon (head) and the thorax, and is usually covered by a single, unsegmented, carapace. The abdomen is segmented in the more primitive forms, but varying degrees of fusion between the segments occur in many groups. It is typically divided into a preabdomen and postabdomen, although this is only clearly visible in scorpions, and in some orders, such as the Acari, the abdominal sections are completely fused.[5]

Like all arthropods, arachnids have an exoskeleton, and they also have an internal structure of cartilage-like tissue called the endosternite, to which certain muscle groups are attached. The endosternite is even calcified in some Opiliones.

Heres a clip about spiders and snakes from the BBC’s Planet Wild series:

Please feel free to leave a comment. Share your knowledge or experiences and help others understand the amazing world arachnids.