If you are in to adventure, or want to follow blow by blow, a real life scientific adventure, then this is for you. Secret Island TV.

We mounted an expedition to Lampi Island 25 miles of the Myanmar (Burma) coast. 100 square miles of unexplored and uninhabited forest teaming with wildlife, but ruled by a heard of killer elephants. The local sea gypsies say the bull has killed at least 15 people.

This Before It’s Too Late expedition saw a group of international and Myanmar scientists and conservationists begin the first of what was hoped to be a number of scientific expeditions to the island.

Their mission to begin a scientific survey of the island by documenting species. Also to track down the herd of elephants and study them if possible.

But you know what they say about the ‘best laid plans of mice and ……..

Get to know the characters of this real life (not reality TV) adventure as for nearly 6 weeks this group of scientists and conservationist tackle this Secret Island. It ain’t no walk in the park. Click here for Secret Island TV.

Or view here with CoolIris

Here are some of the expedition members 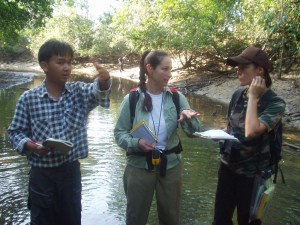 Caitlin O’Connell, a 2000 UC Davis graduate with a Ph.D. in ecology, rocked the scientific world more than a decade ago with her groundbreaking discovery that elephants “listen” to vibrations in the ground as well as sounds that travel through air and water. She is being honored among “Outstanding Young Alumni” with a 2007 CA&ES Award of Distinction.

She helped Namibian subsistence farmers develop effective methods to scare off elephants from raiding fields and destroying crops. She also founded a nonprofit organization (Utopia Scientific) to fund elephant research and created a documentary film company (Triple Helix Productions). She is currently an assistant professor and research associate with the Stanford University School of Medicine, Department of Otolaryngology.

Dr. O’Connell’s sensory perception discovery has extraordinary potential for application in many fields, including behavioral biology and ecology, seismic monitoring, and auditory science. She has more than 20 refereed journal articles in her brief career. “The quality and range of her publications is very impressive,” said UC Davis environmental science and policy Professor Mark Schwartz, her award nominator. Her work has spawned a new generation of scientists studying seismic communication in other terrestrial animals. Caitlin’s innovative work has been featured in a wide range of public media, including National Public Radio, the New York Times, the Economist, Science News and the Discovery Channel. She is also an excellent communicator, presenting to a wide range of audiences in an engaging, informative and well-pitched manner. She has a strong ability for diplomacy, an essential quality for successful work with colleagues and tribes in Africa.

“Caitlin is truly exceptional in the range of abilities she brings to every new situation, quickly sorting through the challenges involved in dealing with new technology, cultures, and concepts,” said Lynette Hart, UC Davis professor in the School of Veterinary Medicine, Department of Population Health and Reproduction. “Combined with a sharp acumen, she brings clarity to her goals. She remains undaunted and optimistic through late nights or whatever hard slogging is required for a project. She sets a high standard for whatever she does.” (Source: 2007 Award of Distinction Recipients C.A.E.S., UCDAVIS) 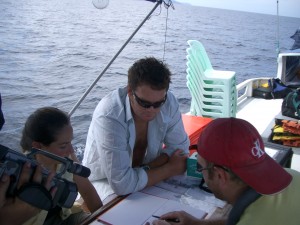 Lucien James “Luc” Longley (born January 19, 1969 in Melbourne, Victoria) is a retired Australian professional basketball player, who was the first Australian to play in the NBA. He attended college at the University of New Mexico. Known for his passing ability and free spirit, Longley drew comparisons to fellow redhead Bill Walton upon his entry into the NBA.

Longley was drafted 7th overall by the Minnesota Timberwolves in 1991. After two plus mediocre seasons with the struggling franchise, the 7’2″ (218 cm) center was traded to the Chicago Bulls for Stacey King late in the 1993-94 season. He won three straight championships with the Bulls from 1996 to 1998.

Following the break up of the championship Bulls in 1998, Chicago did a sign-and-trade deal with Longley, sending him to the Phoenix Suns for Mark Bryant, Martin Muursepp, Bubba Wells, and a conditional first-round draft pick. Longley spent two lackluster seasons with Phoenix, where he gained less attention for his play than for being stung twice by a scorpion while sitting on the floor of his home sorting through his CD collection.1 (Longley also had difficulties with bodysurfing – he managed to separate his shoulder and miss 18 games in 1997. [1]) He was traded to the New York Knicks prior to the 2000–01 NBA season in what was only the second four-team trade in NBA history. The Suns acquired Chris Dudley as part of the deal together with a first-round draft pick from New York and an undisclosed amount of cash, while New York received Longley, Glen Rice, Travis Knight, Vladimir Stepania, Lazaro Borrell, Vernon Maxwell, two first-round draft picks (from the Los Angeles Lakers and the Seattle SuperSonics) and two second-round draft picks from Seattle. Seattle received Patrick Ewing and the Lakers received Horace Grant, Greg Foster, Chuck Person and Emanual Davis. Longley spent one year with New York before retiring. Longley averaged 7.20 points and 4.90 rebounds per game in his 567 regular season game NBA career. Longley played more NBA games than any other Australian and is widely regarded as one of the best Australian basketballers ever.

Longley attended Scotch College, Perth for the majority of his high schooling, was part-owner of the Perth Wildcats basketball club in the Australian National Basketball League for several years (he played 2 games for the club in 1986), and is currently the #1 ticket holder of the Fremantle Dockers in the Australian Football League.

On April 6, 2007, Longley’s $2 million[1] home in Fremantle,[1] Western Australia, was destroyed by a fire.[2] It is believed much of Longley’s memorabilia from his basketball career was lost, although his three championship rings may have been spared.[1]