Mineral hints at bright blue rocks deep in the Earth 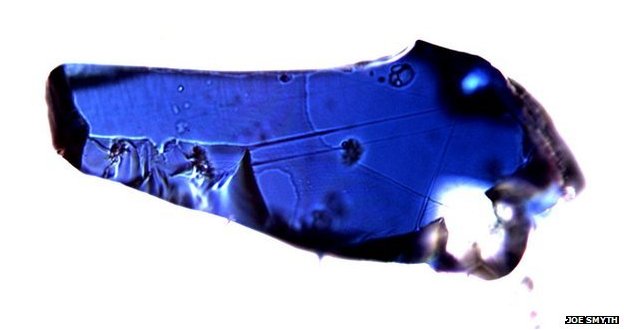 Minerals preserved in diamond have revealed hints of the bright blue rocks that exist deep within the Earth.

They also provide the first direct evidence that there may be as much water trapped in those rocks as there is in all the oceans.

The diamond, from central-west Brazil, contains minerals that formed as deep as 600km down and that have significant amounts of water trapped within them.

Researchers have published their findings in the journal Nature.

The study suggests water may be stored deep in the interiors of many rocky planets.

Diamonds, brought to the Earth’s surface in violent eruptions of deep volcanic rocks called kimberlites, provide a tantalising window into the deep Earth.

A research team led by Prof Graham Pearson of the University of Alberta, Canada, studied a diamond from a 100-million-year-old kimberlite found in Juina, Brazil, as part of a wider project.

They noticed that it contained a mineral, ringwoodite, that is only thought to form between 410km and 660km beneath the Earth’s surface, showing just how deep some diamonds originate.

Buried oceans
While ringwoodite has previously been found in meteorites, this is the first time a terrestrial ringwoodite has been seen. But more extraordinarily, the researchers found that the mineral contains about 1% water.

While this sounds like very little, because ringwoodite makes up almost all of this immense portion of the deep Earth, it adds up to a huge amount of deep water.

Dr Sally Gibson from the University of Cambridge, who was not involved in the work, commented: “Finding water in such large concentrations is a hugely significant development in our understanding of the ultimate origin of water now present at Earth’s surface.” 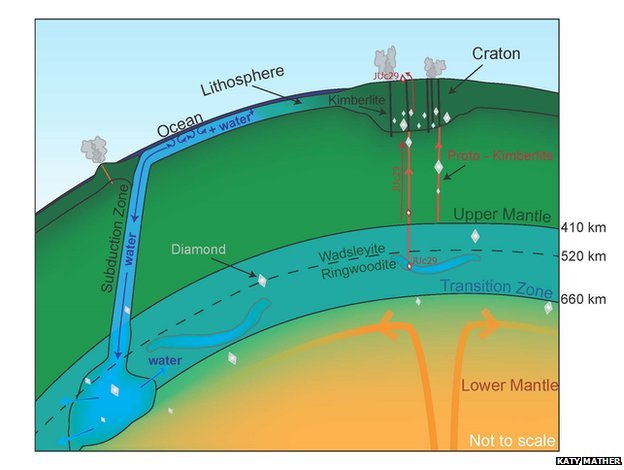 The observation is the first physical evidence that water can be stored in the deep interiors of planets and solves a 25-year-old controversy about whether the deep Earth is dry, wet, or wet in patches.

Discussing his findings, Prof Pearson told BBC News: “The discovery highlights the unique value of natural diamonds in trapping and preserving fragments of the deep Earth.

“It’s incredible to think that, as you hold this sample in your hand, the residual pressure at the interface between the diamond and the inclusion is 20,000 atmospheres.”

Describing his diamond sample, he said: “It looks like it’s been to hell and back, which it has.”

Blue planet
Prof Joseph Smyth of the University of Colorado has spent many years studying ringwoodite and similar minerals synthesised in his laboratory.

He said: “I think it’s stunning! It implies that the interior may store several times the amount of water in the oceans. It tells us that hydrogen is an essential ingredient in the Earth and not added late from comets. 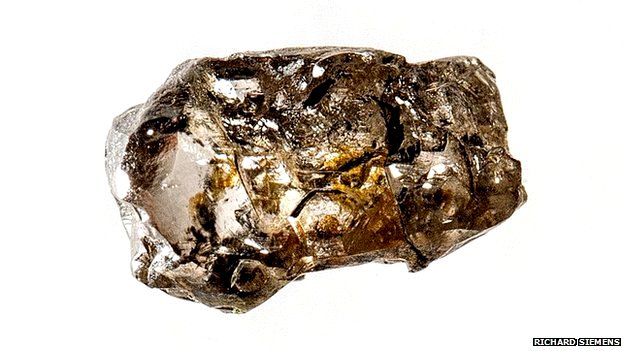 “This discovery implies that hydrogen may control the interior processes of the Earth just as it controls the surface processes, and that water planets, like Earth, may be common in our galaxy.”

A key question posed by the observation is to understand the extent to which plate tectonics on Earth leads to oceans of water being recycled deep within our planet, and to predict the likely amounts of water trapped in other rocky planets.

Ringwoodite is expected to form deep in Mars as well, for example, where it sits against the metallic core.

Grains of the same mineral synthesised in Prof Smyth’s laboratory shine bright blue under the microscope.

Given the new findings of ringwoodite’s water-bearing capabilities, its abundance at depth, and its beautiful hue, the term “blue planet” seems even more appropriate for Earth.