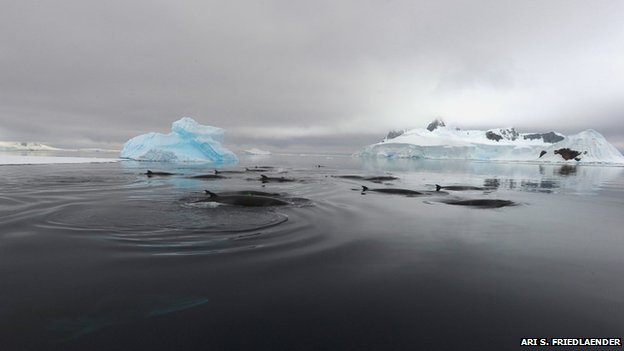 The mystery of a bizarre quacking sound heard in the ocean has finally been solved, scientists report.

The noise – nicknamed “the bio-duck” – appears in the winter and spring in the Southern Ocean. However, its source has baffled researchers for decades.

Now acoustic recorders have revealed that the sound is in fact the underwater chatter of the Antarctic minke whale.

The findings are published in the Royal Society journal Biology Letters.

Lead researcher Denise Risch, from the US National Oceanic and Atmospheric Administration (Noaa) Northeast Fisheries Science Center in Massachusetts, said: “It was hard to find the source of the signal.

“Over the years there have been several suggestions… but no-one was able to really show this species was producing the sound until now.”

The strange sound was first detected by submarines about 50 years ago. Those who heard it were surprised by its quack-like qualities.

Since then, the repetitive, low frequency noise has been recorded many times in the waters around the Antarctic and western Australia. Suggestions for its source have ranged from fish to ships.

The researchers now say they have “conclusive evidence” that the bio-duck is produced by the Antarctic minke whale.

In 2013, acoustic recorders were attached to two of the marine mammals and recorded the whales making the strange noise.

Dr Risch said: “It was either the animal carrying the tag or a close-by animal of the same species producing the sound.” 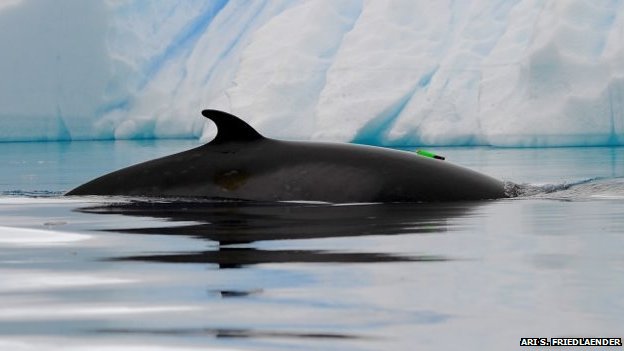 The researchers do not yet know under what circumstances the minke whales make their distinctive vocalisations, although the sounds that were recorded were produced close to the surface and before the mammals made deep dives to feed.

The team says solving this long-standing mystery will help them to learn more about these little-studied animals.

Dr Risch said: “Identifying their sounds will allow us to use passive acoustic monitoring to study this species.

“That can give us the timing of their migration – the exact timing of when the animals appear in Antarctic waters and when they leave again – so we can learn about migratory patterns, about their relative abundance in different areas and their movement patterns between the areas.”

The team will be analysing data from the PALAOA station, the Alfred Wegener Institute’s (AWI) permanent acoustic recording station in Antarctica, which has been recording in the Southern Ocean continuously in the last few years.

Another baffling low frequency noise – called The Bloop – turned out to be the sound of Antarctica’s ice cracking.