By Mike Searle February 20, 2015 August 25, 2021 Knowledge Base Updates
Spread the love
By News from Elsewhere…
…as found by BBC Monitoring 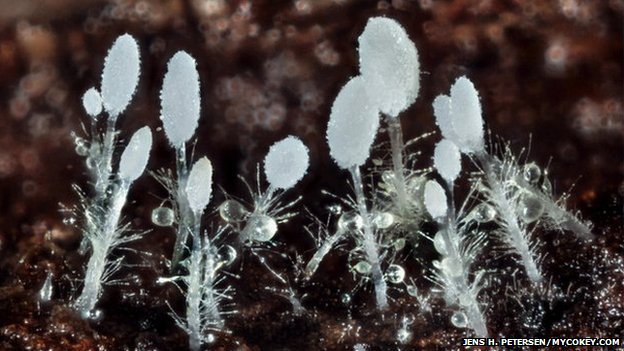 Hirticlavula elegans was found in the forests of northern Denmark, and at 1mm in height it’s quite tricky to spot without a magnifying glass, one researcher tells the Videnskab news website. “It is very, very small. That’s why it has not been discovered before,” says Thomas Laessoe, a mycologist – or fungi expert – at the University of Copenhagen. A close-up of the fungus shows it’s “awfully pretty”, says Mr Laessoe. “That’s why we have given it the Latin name elegans – meaning elegant.”

Experts say it’s quite rare to find an unknown species in Denmark, and while this fungus was first spotted in 1995, there wasn’t enough DNA material to work out whether it was actually new. Now it has been found on wet, rotting bark both in Denmark and in southern Norway. Whether Hirticlavula elegans is edible is still unknown, but it seems unlikely that the new discovery would appeal to foragers for one main reason: “Because of its size, it’s difficult to tell whether or not you have it in your mouth,” Mr Laessoe says.