By Mike Searle February 26, 2015 August 25, 2021 Knowledge Base Updates, Mysterious Nature
Spread the love
Russia: Ice crystals cause ‘triple sunrise’ over city
By News from Elsewhere…
…media reports from around the world, found by BBC Monitoring 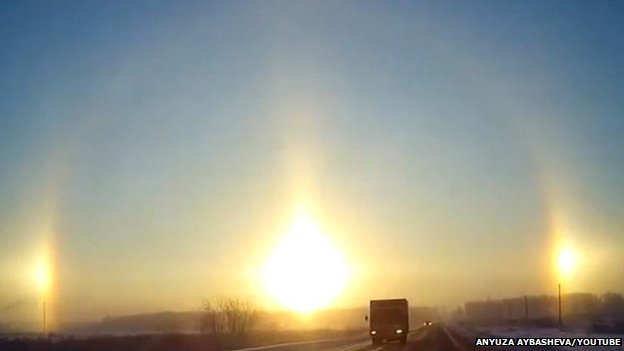 The sunrise “halo” effect can appear several times over the winter, according to a local meteorologist

Residents in a Russian city have witnessed an optical illusion in the dawn sky, which created a triple sunrise.

People in the western city of Chelyabinsk saw what looked like three suns appearing over the horizon, with many sharing photos of the sight on social media, the state news agency Tass reports. According to a local meteorologist, the “halo” effect was caused by ice crystals in the air which refract the sunlight. The crystals, which are invisible to the naked eye, were the product of a particularly chilly morning, with temperatures around -25C, says Galina Sheporenko, the Sverdlovsk region’s chief weather forecaster.

A few days earlier, locals had another unexpected sight when blue-tinged snow covered the city’s streets. While some people feared the unexplained hue might have been dangerous, there turned out to be a sweeter explanation. A local factory making colouring for Easter eggs experienced a spill, causing the powered dye to escape into the air and come to rest on the snow outside, the New York Times reported. Chelyabinsk is perhaps accustomed to unusual events by now. In 2013, it was made famous when a 570kg meteor was seen shooting across the sky above the city, injuring more than 900 people before landing in a nearby lake.