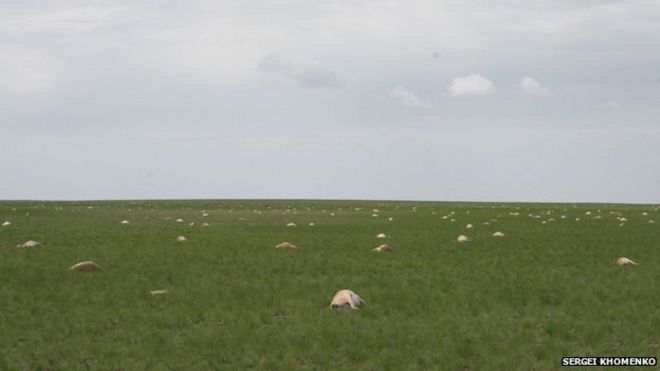 Around half of the world’s critically endangered Saiga antelope have died suddenly in Kazakhstan since 10 May.
An unknown environmental trigger is thought to have caused two types of normally benign bacteria found in the antelopes’ gut to turn deadly.
The animals die within hours of showing symptoms, which include depression, diarrhoea and frothing at the mouth.
Because it is calving season, entire herds of female antelope and their new-born calves have been wiped out.
“They get into respiratory problems, they can’t breathe easily. They stop eating and are extremely depressed; the mothers die and then the calves are very distressed and then they die maybe one or two days later,” said Richard Kock from the Royal Veterinary College in London.
Prof Kock spoke to the BBC’s Science in Action programme after joining an international team in Kazakhstan studying the causes of the die-off.
Conservation setback
The Saiga antelope is a species adapted to cope with the extremes of temperature found on the central Asian steppes of Kazakhstan. They are about the size of a large sheep and once roamed in their millions from Great Britain to northern China.
Populations have fallen repeatedly due to hunting, reaching a low of around 50,000 individuals after the fall of the Soviet Union. This rendered the species critically endangered. 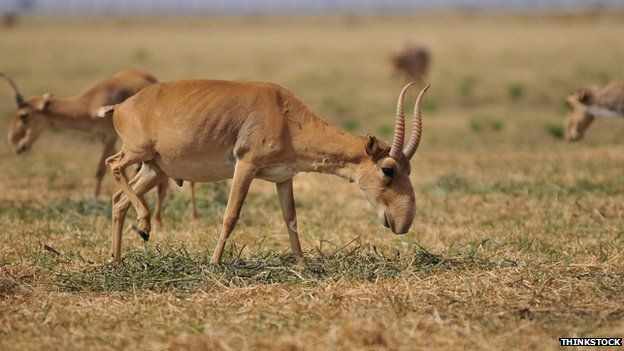 Conservationists have made great progress with Saiga in recent years, due to international efforts to reduce poaching and monitor their populations.
This die-off is a severe setback to the conservation effort because it has wiped out four of the six calving herds in the largest remaining – and best protected – “Betpak-dala” population, in central Kazakhstan.
Steffen Zuther, head of the Association for the Conservation of Biodiversity in Kazakhstan (ACBK), was monitoring calving in one of the herds containing thousands of affected animals.
“Over two days [in the herd I was studying] 80% of the calving population died,” he told the BBC.
The whole herd then died within two weeks. 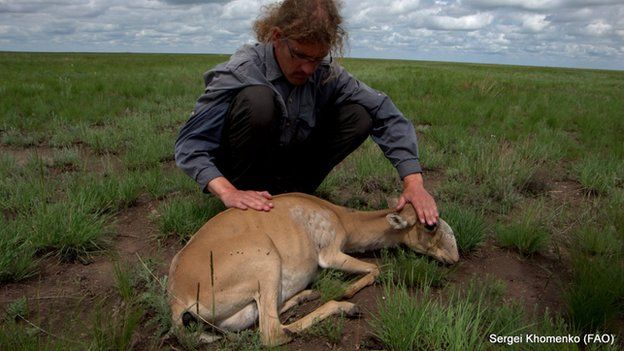 Steffen Zuther has been monitoring herds of antelope in Kazakhstan

About 120,000 individual antelope have died, from a global population of approximately 250,000. Fortunately, mortality rates are now dropping, although the deaths continue in some populations.
“What we’re seeing is sort of a perfect storm of different factors,” Prof Kock explained.
Two different bacteria, pasteurelosis and clostridia, have been found in every dead animal studied. These bacteria are naturally found in the animals’ respiratory and gut systems, so something must have reduced the immunity of the animals.
One possible trigger is climatic. This year a very cold winter was followed by a wet spring, and this may have affected the immune competence of the animals, making them more vulnerable to the bacteria.
This, or some other trigger, pushed the animals past a threshold at which the bacteria overcame Saiga immune defences and became deadly enough to transmit to their calves.
dead antelope and calf
Because of its timing, the wave of deaths has claimed mothers and calves
“There’s no infectious disease that can work like this,” said Prof Kock. He added that the wave of Saiga deaths was not unprecedented. “[This] die-off syndrome has occurred on a number of occasions.”
In 1984, 2010 and 2012 there were massive die-offs, but none of these claimed such a massive proportion of the population.
‘Doesn’t make sense’
Despite these huge losses, Saiga antelope are surprisingly well adapted to recover quickly from population crashes.
“Its strategy for survival is based on a high reproductive rate, so [the Saiga] produce triplets and have the highest foetal biomass of any mammal. It’s built, in a sense, to recover from collapse,” Prof Kock said.
The Saiga’s natural habitat has dramatic temperature fluctuations. “In a very severe winter… you could lose 90% of the population.”

But losing 100% percent of some populations within two weeks “doesn’t make any sense” from a biological or evolutionary perspective, Prof Kock said.

There are five main populations of Saiga remaining in central Asia

Saiga antelope have been a conservation success story after recovering from their critical low in the 1990s. The animals now exist in five locations across central Asia, but all individuals affected by the sudden die-off are from the largest remaining Betpak-dala population in Kazakhstan.
This population consists of six major herds, of which four have been completely wiped out.
Steffen Zuther is going back into the field to investigate more remote populations. He hopes to identify what triggered this population collapse, so he can work to stop it happening again.