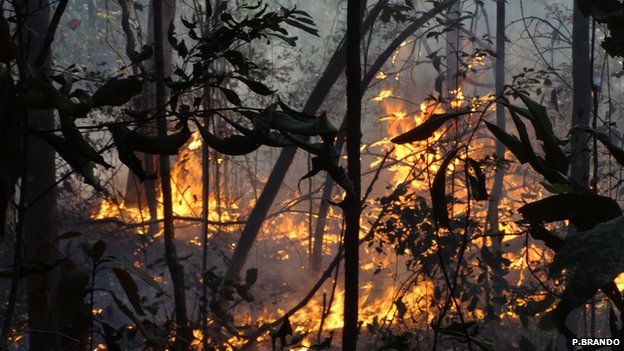 The combination of fire and extreme weather could accelerate tree mortality in the Amazon, a study has suggested.

Researchers said field experiments showed that severe droughts could trigger dieback of forests in the near-term.

Efforts to curb deforestation needed to be accompanied by initiatives to stop land management fires spreading into adjoining forest reserves, they added.

The findings appear in the Proceedings of the National Academy of Sciences.

Co-author Paulo Brando, a researcher from Brazil’s Amazon Environmental Research Institute and the Woods Hole Research Center, US, explained that the findings were based on data gathered from a long-running field experiment, described as the first of its kind.

In 2004, the team established three plots in the south-east Amazon – one of which was burned annually, another was burned every three years, while the remaining one was left untouched as a control plot. 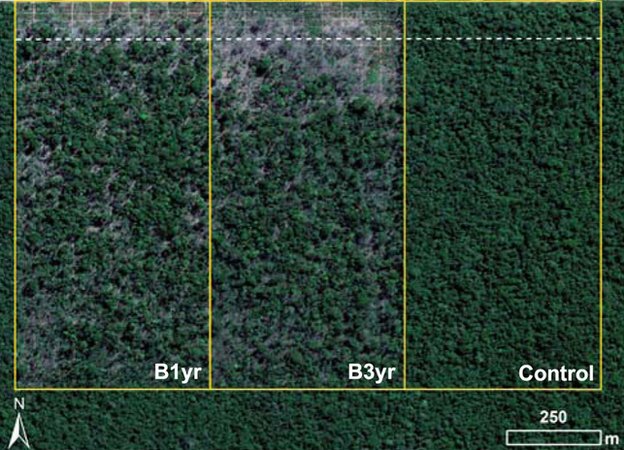 “If we burned every year, we did not have enough fuel (leaves and trees) to drive a high intensity fire – fires that will kill a lot of trees – so we published a few papers saying that this kind of forest was quite fire resistant,” explained Dr Brando. 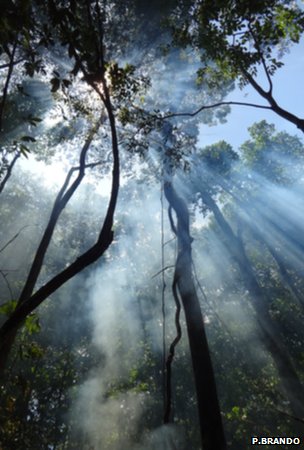 But he told BBC News that the team was surprised in 2007: “We burned both plots (fourth burn for the annual plot and second burn for three-year plot) and both plots responded really strongly to the fires.

“There was a shift in the system from a forest to a savannah-like environment… grasses were invading the forest and there were fundamental changes within the ecosystem.

He added that drought conditions during that year triggered the change: “There were more leaves and twigs on the ground, they were drier so the fires were quite intense.

Dr Brando said the abrupt high tree-mortality rates had a lasting impact on the landscape as grasses invaded the space once occupied by trees.

“You do not need drought anymore to observe high density fires because grasses can accumulate way more fuel than the native, wood vegetation,” he explains.

As well as observing the loss of a number of tree species, Dr Brando said there were wider ecological consequences as a result of losing tree cover.

“Burned plots were four degrees warmer because they had fewer leaves and less capacity to cool down the system through photosynthesis,” he observed.

“So we have seen major changes, not only in species composition but in the functionality of the forest as well; it cycles less water because it is warmer and stores less carbon.”

Climate models suggest that the probability of severe droughts in the region are likely to be much more common by the end of the century.

At an international conference held at the University of Oxford in 2012, researchers presented findings that suggested tropical forests in Africa could be more resilient to future climate change than the Amazon and other forested regions.

Scientists at the gathering concluded that tree species in Africa’s tropical forests had endured a number of climatic catastrophes over the past 4,000 years.

During that period, the African forests had lost species that would have been potentially vulnerable, while the remaining species were “relatively adaptable… to quite rapid changes in rainfall,” explained conference organiser Yadvinder Malhi, from the university’s Environmental Change Institute.

Responding to Dr Brando’s findings, Prof Malhi said: “Much of current scientific opinion suggests that intact tropical forests may be quite resilient to climate change, but the combination of climate change, land-use change and fire may be much more destructive.

Prof Malhi, who was not involved in the study, added that these ideas have rarely been demonstrated in practice.

“What is unique about this study – a long-term experiment that took a lot of stamina and persistence to implement – is that it directly demonstrates the effects of this deadly combination of factors, and enables exploration of the details of the ecological processes and interactions involved,” he told BBC News.

Here’s a short clip of some of the Amazon’s most endangered monkeys.