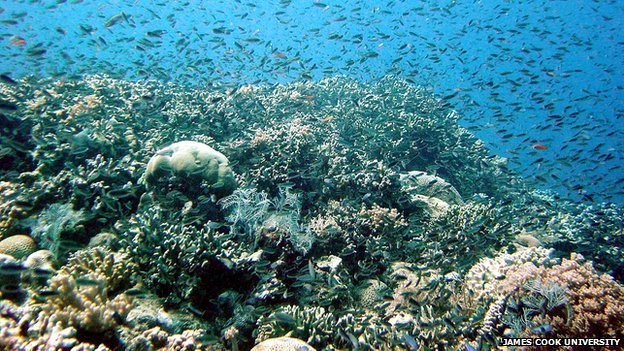 Unesco has threatened to list the Great Barrier Reef as a World Heritage in Danger site, amid controversy over a plan to dump dredged sediment.

Reef authorities granted permission for the dumping in January as part of a project to create one of the world’s biggest coal ports.

But scientists have warned that the sediment could smother or poison coral.

Unesco said given “significant threats” to the reef, it should be considered for inclusion on the danger list.

The Great Barrier Reef is the world’s largest coral structure, rich in marine life. It stretches for more than 2,600km (1,680 miles) along Australia’s eastern coast.

‘Other alternatives’
The dumping is part of a major development that would allow several companies to export coal reserves from the Galilee Basin area through the Abbot Point port.

Abbot Point lies south of Townsville on the Queensland coast.

Late last year, the government approved an application for the coal terminal to be expanded. The dredging is needed to allow ships into the port.

The approved disposal site for the dredged sediment is located approximately 25km (16 miles) east-north-east of the port, inside the marine park.

The disposal operation would be “subject to strict environmental conditions”, the Great Barrier Reef Marine Park Authority said when it approved the plan.

But the plan remains highly controversial.

In its report, Unesco said that the Abbot Point dumping plan was “noted with concern”.

“Indeed, this was approved, despite an indication that less impacting disposal alternatives may exist,” the report pointed out.

More widely, it said that a long-term plan for sustainable development due to be completed by Australia by 2015 had to result in “concrete and consistent management measures sufficiently robust to ensure the overall conservation” of the reef.

In particular, it had to address major drivers of reef decline “such as water quality and climate change, and the need to constrain coastal development and associated activities”.

“Given the range of significant threats affecting the property and the conflicting information about the effectiveness of recent decisions and draft policies, significant concern remains regarding the long-term deterioration of key aspects of… [the reef] and the completion of work to tackle short- and long-term threats,” it said.

In the absence of “substantial progress”, Unesco should consider putting the reef on the endangered list at a summit to be held in 2015, the report said.

Australia’s Environment Minister Greg Hunt pointed out that the report highlighted progress in a number of areas, including water quality.

The approval of the Abbot Point development “was subject to rigorous environmental assessment”, he said in a statement.

Queensland’s Environment Minister Andrew Powell, meanwhile, said he was confident that ongoing work would mean the reef was not listed as endangered.

“We are committed to protecting the reef, we can continue to operate sensible, environmentally responsible ports adjacent to the reef,” the Australian Broadcasting Corporation quoted him as saying.

Take a 3 minute break and enjoy some beautiful underwater pictures from the reefs around Australia.