Researchers have developed a new manufacturing method which could bring down the cost of making a type of solar cell.

A team at Liverpool University has found a way of replacing the toxic element in the process with a material found in bath salts.

The scientists say that this could have a “massive, unexpected cost benefit”.

The research has been published in the Journal Nature and unveiled at the ESOF conference in Copenhagen.

Dr Jon Major, who led the research said that his team’s work might be the development that brings the cost down to the level of fossil fuel,” he told BBC News.More than 90% of the solar cells are made from silicon. Around 7% are made from a material called cadmium telluride. The cadmium telluride cells are thinner than silicon and these are popular because they are also lighter and cheaper.

Toxic ingredient
They have the drawback that a toxic chemical, cadmium chloride, is needed to manufacture them. Cadmium chloride is also expensive.

A significant proportion of the manufacturing cost of cadmium telluride cells is to protect the workforce from toxins and to dispose of contaminated waste products safely, according to the research team.

Dr Major discovered that a cheaper, non-toxic alternative, magnesium chloride, could be used instead of the toxic compound and work just as well. 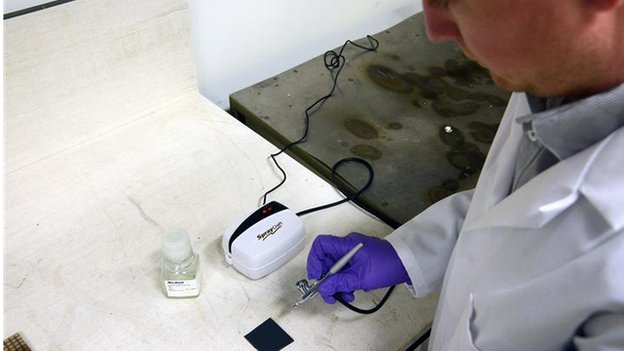 Solar cells being made. No need for a protective mask

Magnesium chloride is completely safe. It is used to make tofu and is found in bath salts. It also extracted from sea water and so is a small fraction of the price of cadmium chloride.

Dr Major’s boss, Prof Ken Durose, who is the director of the Stephenson Institute for Renewable Energy at Liverpool University, believes that his colleague’s discovery has the potential to transform the economics of solar energy.

“One of the big challenges with solar energy is to make it cheap enough to compete with conventional power generation,” he told BBC News.

“Solar will progressively get cheaper until it will become more and more feasible for solar power to be produced from solar electricity farms.”

Comparing the relative costs of different energy technologies is extremely difficult because they are so different and the results are contentious.

But when pressed, Prof Durose made his best guess to assess the potential impact of the new technique, stressing that his figures were rough and ready and contained assumptions that could and probably would be challenged.

But he thought that the benefits of cheaper materials and the cost saving from not having to deal with toxic materials could bring the cost of cadmium telluride cells to 8.2 pence per unit – lower than gas.

However, Dr Nigel Mason of PV Consulting believes that the researchers are being very optimistic in their assessment of the impact their development will have on the price of solar energy.

“The development is great for the environmental management and safety of the production process but the cost of cadmium chloride material and dealing with its safe disposal is a relatively small fraction of production cost,” he told BBC News.

A key factor is that tellurium is one of the rarest elements on Earth so there would not be enough of the chemical to make enough solar cells if the technology took off, according to Dr Mason.

“There is enough sunlight that falls on the Earth every hour to generate enough electricity for the planet for a year,” he said.

“The way solar is progressing it will just be a matter of time before it becomes competitive with fossil fuels and eventually replace them.”

Climate change is driving the hunt for better and cheaper forms of energy. If we don’t find an alternative scientists say life on earth will never be the same again. We are already seeing unprecedented changes in our weather patterns. Hotter than ever summers and terrifying storms.

This clip Storm Front and Climate Change takes a look at the science of climate change and the future weather patterns we could be looking at.