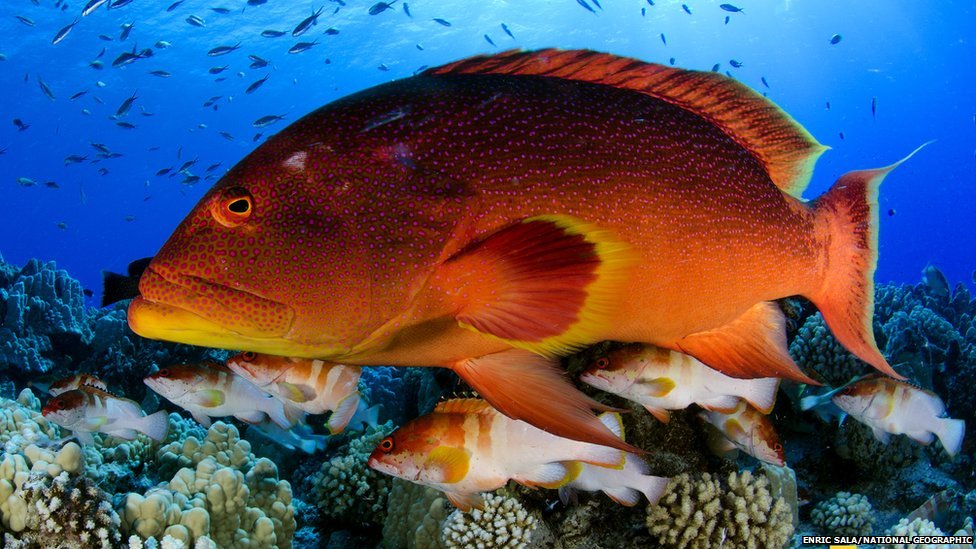 Researchers say that “immediate protection” is required for the waters around the remote Pitcairn Islands in the Pacific, home to one of the world’s rarest and most valuable collections of marine species.

The waters have “unique global value that is irreplaceable” says the report, from an international team of scientists.

They’ve carried out the first underwater surveys of the deep and shallow waters around the islands, best known for their connection to the mutiny on the Royal Navy ship, Bounty, in the 18th century.

Some of the mutineers settled on Pitcairn and around 50 of their descendents still live there, governed as a British overseas territory.

The four islands in the group lie halfway between New Zealand and South America.

They are said to be further from a continent than any other inhabited island.

The extremely remote location has prevented prior scientific exploration of the unsullied waters.

“People know about the mutiny on the Bounty but the true bounty of the Pitcairn’s is underwater.”

The scientists found healthy coral reefs and an abundance of fish, around half of them not found anywhere else in the world. 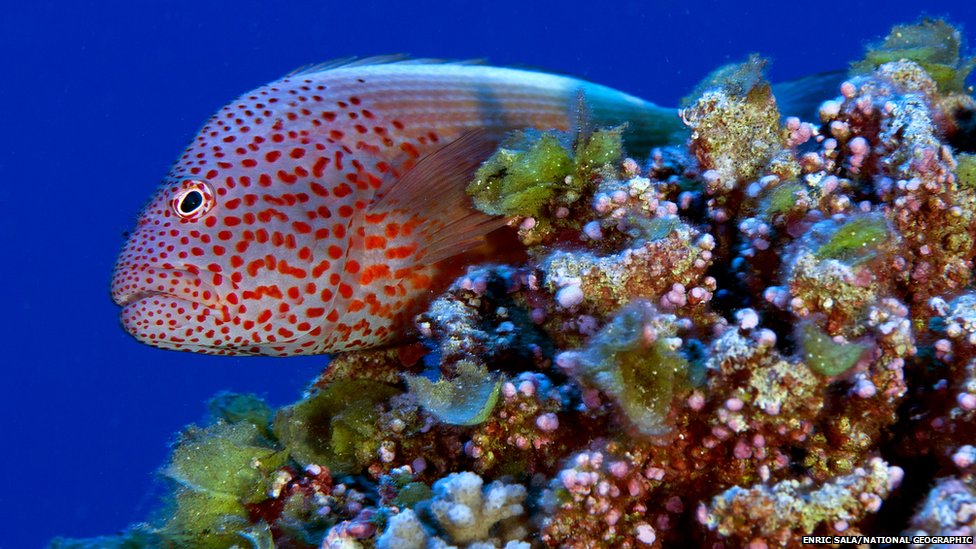 A fish seen near Henderson Island, the largest of the Pitcairn group

A key indicator of the water’s good state were the number of top predators like sharks that the scientists recorded. They accounted for over half of the biomass at Ducie Atoll, one of the least disturbed locations.

Perhaps the most significant discovery was down to the purity of the water. The scientists found a type of coralline algae living deeper than anywhere else on earth.

“It lives at 382m that’s more than 100m deeper than the previous record, because of the clarity of the water,” said Dr Sala.

“It also allows coral reefs to grow to depths that are incredible elsewhere, we found well developed reefs between 75 and 100m below the surface.”

The remoteness of the islands has been critical in preserving the waters but the scientists saw some evidence of the encroachment of illegal shark fishing, carried out by foreign fleets. 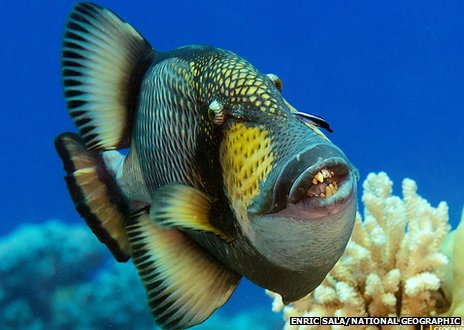 A voracious, toothy predator, the titan triggerfish, being cleaned by a tiny wrasse

They argue that plans to turn the islands into one of the world’s biggest marine reserves should go ahead as soon as is practicable.

The islanders have voted in favour of this approach and a plan has been submitted to the UK government to create a 836,000 sq km protected zone around the islands.

The plan is still being considered by the UK, but it has been boosted in recent weeks with the announcement that the United States is to declare a huge reserve around the Pacific Remote Islands Marine National Monument.

The scientists say the time is right for the Pitcairns to follow suit.

“These islands are like a time machine, that allow us to get back hundreds of years to see what we have lost,” said Dr Sala.

“But we can also to determine what we want for the future.”

Their report is published in the journal, PLOS One.