The state of the world’s biodiversity appears worse than ever. Population sizes of vertebrate species measured by the LPI have halved over the last 40 years.
The Living Planet Index (LPI), which measures trends in thousands of vertebrate species populations, shows a decline of 52 per cent between 1970 and 2010. In other words, the number of mammals, birds, reptiles, amphibians and fish across the globe is, on average, about half the size it was 40 years ago. This is a much bigger decrease than has been reported previously, as a result of a new methodology which aims to be more representative of global biodiversity.

Biodiversity is declining in both temperate and tropical regions, but the decline is greater in the tropics. The tropical LPI shows a 56 per cent reduction in 3,811 populations of 1,638 species from 1970 to 2010. The 6,569 populations of 1,606 species in the temperate LPI declined by 36 per cent over the same period. Latin America shows the most dramatic decline – a fall of 83 per cent.

Habitat loss and degradation, and exploitation through hunting and fishing, are the primary causes of decline. Climate change is the next most common primary threat, and is likely to put more pressure on populations in the future.

Terrestrial species declined by 39 per cent between 1970 and 2010, a trend that shows no sign of slowing down. The loss of habitat to make way for human land use – particularly for agriculture, urban development and energy production – continues to be a major threat, compounded by hunting.

The LPI for freshwater species shows an average decline of 76 per cent. The main threats to freshwater species are habitat loss and fragmentation, pollution and invasive species. Changes to water levels and freshwater system connectivity – for example through irrigation and hydropower dams – have a major impact on freshwater habitats.

Marine species declined 39 per cent between 1970 and 2010. The period from 1970 through to the mid-1980s experienced the steepest decline, after which there was some stability, before another recent period of decline. The steepest declines can be seen in the tropics and the Southern Ocean – species in decline include marine turtles, many sharks, and large migratory seabirds like the wandering albatross. 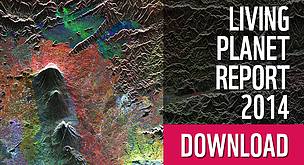