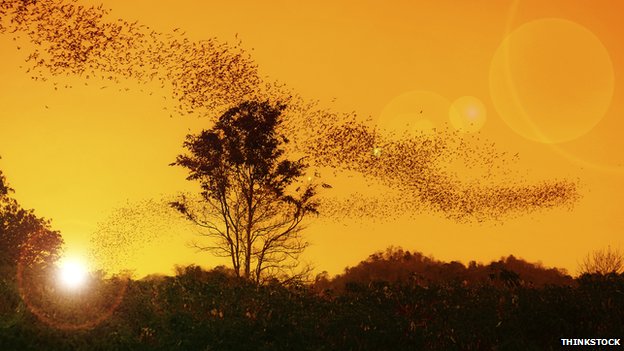 Bats use the pattern of polarised light in the evening sky to get their bearings, according to a new study.

As well as having unusual echolocation skills and their own magnetic compass, bats are now the first mammals known to make use of polarised light.

Other animals with this ability include birds, anchovies and dung beetles.

To make the discovery, published in Nature Communications, zoologists placed bats in boxes with polarising windows before watching them fly home.

Light waves normally wiggle all around their direction of travel, but when they pass through special filters – or are scattered by gases in the atmosphere – they can become polarised, so that the oscillations all line up.

“We initially didn’t think that the bats would use polarised light,” said the paper’s senior author, Dr Richard Holland from Queen’s University in Belfast.

Dr Holland was one of the scientists who discovered in 2006 that bats navigate by somehow sensing the earth’s magnetic field – but that in-built compass needs to be calibrated. Other experiments showed that the calibration was happening at sunset, when the bats’ day begins.

“We thought that surely, the sun’s disc itself would be a more likely cue,” Dr Holland told the BBC. But his team recently tested how bats responded when the sun’s image was shifted by mirrors, and found no difference. 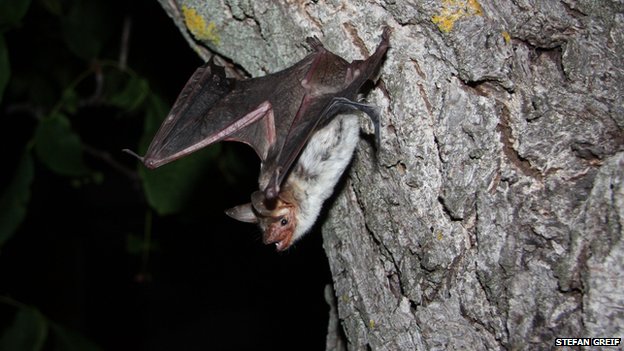 Guided by the polarised light? One of the greater mouse-eared bats used in the study

So they switched their attention to the pattern of polarised light that appears at sunset, which is already known to be important for various other animals, particularly birds.

t’s invisible to humans, unless we wear polarising glasses. “If you were standing looking at the sun, you’d see a dark band going directly over your head, from left to right,” explained Dr Holland.

To find out if bats were using this pattern, the scientists put them into boxes with a nice view of the sunset, but only through custom-made polarising windows. Half the boxes had windows that recreated the normal pattern, and half flipped it around by 90 degrees.

Then they took the bats about 20km from their home roost in a Bulgarian cave, released them and tracked them. Sure enough, the bats from the boxes with rotated windows were much more erratic at heading toward home.

In proper scientific fashion, when Dr Holland was collecting the data he was “blinded” as to which group of bats was which – and he initially thought he might be wrong all over again.

When a colleague revealed the real designation and they compared both sets of results, it was a satisfying moment. “Whenever you set out to test one of these ideas, it’s always amazing that it actually works!” Dr Holland said.

Although plenty of other animals, including some birds, fish, amphibians and insects, are known to detect polarised light, the only other mammal that we know can perceive it is, in fact, humans. In certain situations, such as when light reflects off glass or water at particular angles, or when we look at white areas on an LCD screen, some people see a blurry phenomenon known as “Haidinger’s brush” – produced by the polarisation of light.

According to Dr Marie Dacke, who studies animal vision at the Lund University in Sweden, how this happens is still a mystery.

Insects, Dr Dacke explained, have specialised receptors in their eyes for detecting polarisation. “But in birds and fish and so on, we don’t really have a clue about how they’re able to perceive this kind of light,” she told the BBC.

“I did not expect them to find that in mammals, such as in a bat. So I thought this was really fascinating.

“The big challenge will actually be to find the mechanism by which bats are able to do this. There is still a bit to reveal before the full story is known.”

Here’s an interesting video clip on studies into Australian bats.