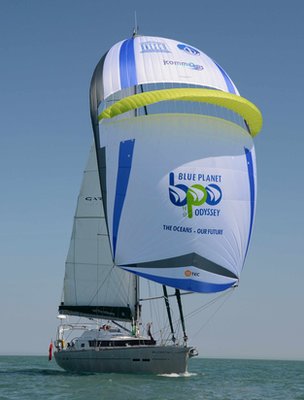 A crew of sailors is embarking on a pioneering citizen science expedition through the Northwest Passage between Canada and Greenland.

During the voyage, they will collect data on weather conditions, wildlife, phytoplankton levels and microplastic.

The eight-strong crew includes 14-year-old Nera Cornell, who is believed to be the youngest Briton to sail the route in the Arctic Circle.

Until relatively recently, the route was inaccessible for most vessels because it was blocked with sea ice.

The expedition aboard the ship Aventura is part of the Blue Planet Odyssey, devised by veteran sailor and author Jimmy Cornell, which aims to raise awareness of how climate change is affecting life on Earth.

“Sailors are in touch with the oceans and the seas, so they are already experiencing the effects firsthand,” explained Doina Cornell, Jimmy’s daughter and crew member.

“All of projects are very much based on the idea that we are not professional scientists and we are doing citizen science,” she told BBC News.

“We have tried to come up with projects that we can do while we are busy sailing the boat but will enable us to collect data that is useful.”

As well as a partnership with Unesco’s Intergovernmental Oceanographic Commission (IOC), the crew will also be collecting data for US researchers and plastic pollution reduction organisation 5 Gyres.

They will also measure phytoplankton levels in the waters of the infrequently travelled Northwest Passage for the University of Plymouth’s Richard Kirby and his team.

“The Northwest Passage has only been occasionally ice-free since 1999 so before this time we have very little data,” he told BBC News.

“Of course, there is data from the western and eastern sides of the Passage.

“For example, we do know that one of the first consequences of ice-free water in the Arctic was when plankton scientists noticed the appearance of a Pacific diatom (Neodenticula seminae) in the Atlantic,” Dr Kirby observed.

He described N. seminae as an key plankton species in the Pacific, as the tiny organisms are very abundant and play an important role in absorbing atmospheric carbon dioxide.

The crew will be taking measurements using a device known as a Secchi disk, a white disk measuring 30cm (1ft) in diameter.

It is lowered into the water on the end of a tape measure, and when it is no longer visible from the surface, the reading – known as the Secchi depth – is recorded.

“It is a very robust method and not prone to error and it is a good measure of phytoplankton abundance,” Dr Kirby explained.

“[This expedition] will give us the first Secchi-disk data from the Northwest Passage , which will establish a baseline for future studies.

“When we go back in future years, we will be able to look at when it changes because we are there at the beginning (of an ice-free era).”

“Will we, on this trip beat the Secchi-disk record, which stands at 79.5m in the Atlantic.”

The Northwest Passage is a series of sea channels between North America and Greenland and remains one of the most testing maritime challenges for sailors.

Located deep within the Arctic Circle, it is a navigable route through the frozen landscape providing a strategically important shortcut between the Atlantic and Pacific Oceans.

Although it has fascinated and attracted explorers since the late 15th Century, opening a commercial sea-route so close to the North Pole has remained elusive. It is only in recent years, with the retraction of Arctic summer sea-ice, that the route became passable without the need of icebreaker vessels.

To date, fewer people have sailed through the Northwest Passage than have reached the summit of Mount Everest. 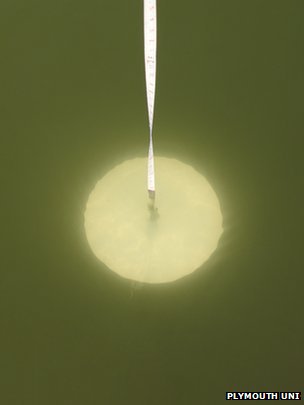 The Secchi disk, invented in 1865 by Angelo Secchi – the Pope’s astronomer – is a circular disk that is used to measure water transparency in oceans and lakes.

The concept had long been used as a navigational tool by sailors. By lowering a dinner plate beneath the waves and measuring the depth it disappeared, it provided the crew with an indication of what ocean current they were currently sailing through.

Fr Secchi was asked by the head of the Papal Navy to measure the transparency in the Mediterranean Sea. This task gave rise to the formalised measuring system.

Ever since the first measurement was taken aboard the Papal yacht in April 1865, marine biologists have used it to measure phytoplankton abundance.

Since Secchi’s first design, there have been a number of subsequent revisions. The two most common colour variations in use today are the all-white disk and the black-and-white quadrant version.
Follow @b4itstoolate